As CEO of Kjell & Company, Thomas structured the family business in several areas, in order to manage continued profitable growth. During the period Kjell & Company grew from 38 to 87 stores in Sweden with very good profitability development. In 2015, the company opened its first stores outside Sweden. He was also one of the main drivers in the sale of the company, when ICA-Group (formerly Hakon Invest) in 2014 left its 50% holding and a new venture capital company, in competition with several others, acquired about 70% of the company.

Most recently, Thomas comes from Carpet Vista, a Malmö based international e-commerce company where he worked as CEO, restructuring the company to enable future profitable growth. 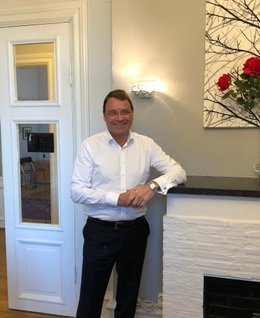 Thomas has extensive experience in leading and developing companies in the role as President and CEO, mainly within IT and Retail.

The companies have been listed companies as well as unlisted businesses owned by private equity companies.

He has mainly worked with fast-growing companies, which in their growth needed structure, without thereby losing pace or profitability. Thomas has made several acquisitions over the years.

After completing a bachelor’s degree in business economics, Thomas began his career as a trainee and sales representative at IBM. After a few years as a salesman, Thomas was appointed sales manager for the IBM-reseller Owell's sales office in Malmö. Owell was at the time a small unprofitable company with about SEK 100 million in sales. Over the years, the business developed from product sales to also offer a comprehensive range of services. He was given new roles in the company, such as regional manager, marketing manager and finally CEO. During that time, sales increased to SEK 4 billion with good profitability. Owell was listed on the stock exchange and later bought by WM-data.

WM-data Owell was renamed ATEA, for which Thomas was CEO for 5 years. Under Thomas's leadership, Atea expanded from being a Swedish company to having operations in all four Nordic countries.

The assignment as CEO of MultiQ was turning a small international public listed company, which lost money under 17 years out of 18 possible into a growing profitable business. Through acquisitions, restructuring, revitalization with new people, clarification of goals and visions and a sustainable strategy, the company's profitability and sales compared with the previous year were improved every month under Thomas's leadership.

As consultants, we have a great deal of experience in operating positions and taking responsibility for change processes. Our focus is on the parts that are often postponed, such as implementation and anchoring in the business, where we focus the individuals on the organization. We take responsibility for making plans happen and achieving results.